A husband and wife, living in Chicago, go to bed one night and in the middle of the night there is a loud beeping noise. But the husband knows if he acknowledges it he will have to get up and investigate it so he

pretends to be sleeping until his wife shakes him and asks, ‘What’s that noise?’ and he answers, ‘What noise?’ But he has to ask very loudly because of the loud beeping noise. So he gets out of bed, goes down the hallway and takes care of it. And his wife asks him what it was and he answers it was the smoke alarm. And she asks what made it stop and he says I took the battery out. And she says, ‘You can’t do that, there could be a fire in the house!’ And he answers, ‘There’s no smoke, no heat coming from anywhere, and we don’t smell anything. It’s clearly a battery problem I’ll replace it tomorrow.’ And they go back to sleep.

The next day he has to get up very early to make an important presentation at work, everyone in the house is still asleep when he leaves, though he does notice there seems to be a few odd malfunctions, the hall light and the coffee maker didn’t work, but he does’t think much about it and went to his breakfast meeting. 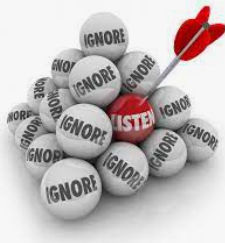 About 30 minutes into the breakfast he was approached by the server who told him, ‘Your wife called and asked you to come home. She said the house is on fire.’ He went home. Fire trucks were parked all over the cul-de-sac. He joined his family and dog as they watched the outside of their white house turn brown, with great clouds of smoke billowing up.

It turns out some birds had built a nest in their chimney which eventually started smoldering which set off the smoke alarm which he had disabled, and so a fire started behind the wall and did unbelievable damage. All from a little bird’s nest and a battery removed from a smoke alarm because a husband wanted to sleep. As he says, ‘What kind of idiot removes a battery out of a smoke alarm so he can sleep better during a fire? That would be me. The smoke alarm was not my enemy, the fire was. The smoke alarm was trying to help me.’

We have a life, that’s our house. We have a soul, do you hear any beeping sounds? It might be a feeling of guilt because you’re aware there are people who need food but you wonder what good the little money you could give can make and so you go shopping instead. Or, you’re aware that you’ve been working too much and neglecting your family too much, but you decide that if you just work to the next promotion and raise, then you can make it up to them. It may be there is a loneliness that is consuming you but rather than deal with it, rather than deal with the ‘beeping sound’ you take the batteries out of the smoke alarm and convince yourself that the problem is other people.

Sometimes the Spirit will bring a sense of conviction, and when it does the best response is not to suppress it, not to take out the batteries, but to get out of bed (our comfort zone), take a look around (examine our life), and put out the fire before it does more damage. Jesus forgives our sins, but we have to confess and repent because ignoring it and denying it only makes it worse. God Bless, Donn