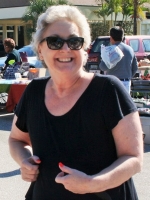 Cindy was born in Washington State but grew up in Lake Park, FL. At Auburn University she received a B.A. in Psychology in 1979 with a double minor in Spanish.

After a life-changing trip to Spain with her grandmother in the summer of 1979, Cindy fell in love with the country (and with Carlos) and moved to Spain in 1980 where she lived until 2001. She has one son, Roberto, 35, a civil engineer who works and lives in Madrid, and one grandson, Nicolas, born in Jan 2015.

In 2001, she moved back to the U.S. permanently to pursue a Masters degree in counseling. She began work and studies toward Certification as an Addictions Counselor while working at Hanley-Hazelden in West Palm Beach.

It was during this experience that she felt God’s call to pursue studies that would make her better qualified to assist others in the spiritual part of their journey in recovery and in life.

In 2008, she received a Masters of Divinity from Lexington Theological Seminary in Lexington, KY. She was ordained in the Christian Church (Disciples of Christ) on May 25, 2008. First Christian Church in West Palm Beach called her to serve as their Associate Minister on June 3, 2008.

Her ministerial duties include leading VBS, Children Worship & Wonder, Bible studies, and preaching. In addition to her ministerial work, she continues to offer addictions and spiritual counseling to individuals and treatment centers in this area. She also serves on the S.E. Fla. Chrysalis Board as Spiritual Leader and is active in its sister organization Emmaus.