There’s been a lot of talk (which will probably be resolved by the time you read this) about judges, in particular Supreme Court Justices. I have to say I’m a bit disappointed that I’ve never been asked. So I’ve never gone to Law School, so I’ve never taken a Bar exam, so I’ve no experience as a lawyer, the thing that qualifies me (in my opinion) is that I have a lot of experience in judging.

And in judging others I end up excluding some people. There are some people I don’t want to be around. 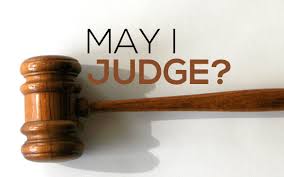 I have standards, but the truth of the matter is I can’t meet my own standards.

Jesus has standards too. Basically Jesus standard is, if you want in, you are in, and even if you don’t want it, we’ll keep the light on for you. When it comes to the question of who is in with God and who is out, Jesus and the New Testament consistently focus on the center, not on the boundaries.

In John chapter 4 we read about Jesus having the longest recorded conversation in the gospel with a woman who was ‘judged’ and ‘excluded.’ They were at a well and Jesus told her, “…whoever drinks of the water that I shall give him will never thirst; the

water that I shall give him will become in him a spring of water welling up to eternal life.” (John 4:14)

There is an old tradition on large Australian ranches located on often very dry land that there are two ways of keeping cattle on the ranch. One is to build a fence; the other is to dig a well. This is the gift of grace that is offered to a world that has become increasingly polarized and politicized. No fences to keep others out, just the life-giving water of Jesus, drawing people ever closer to his presence, his love, his grace and the Kingdom of God.